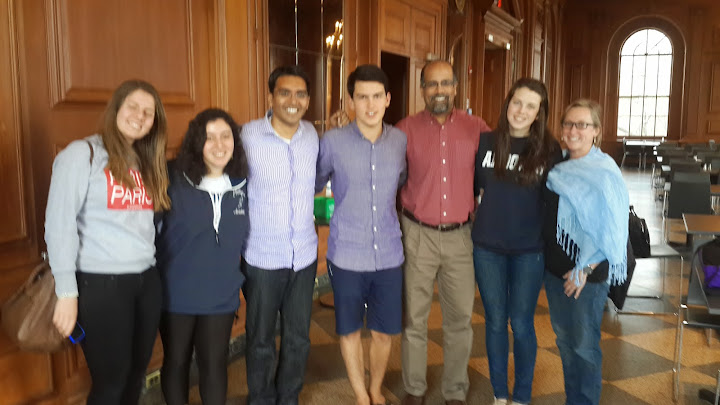 Just last evening, I was called to share a few thoughts for a panel on 'Leadership'. There's enough people, discussions, papers, research thesis's out there on the topic, but this was special. It was organized by the a group of 15 kids from the Phillips Academy in Massachusetts who are visiting India as part of a program called Niswarth. I've been closely connected with the dean Rajesh and the program through my days in Ahmedabad, as well on my recent visit to the USA so I was delighted to join. It was such a beautiful evening - with about 30 people cozying up in a room for an interesting conversation.

To give you an idea of what transpired, Vandana Goyal, the CEO of Akanksha leaned over and whispered - I can't believe these kids are only 16 years old. And she was right - I can't quite imagine what I was up to when I was their age - definitely not re-imagining what Leadership can mean.

I try not to head into such gatherings with pre-decided concepts. It's easy to fall into the trap of coming up with points and structures on the topic, but that doesn't allow for an emergence in the discussion. In this case, I realized the kids were way more progressive than their age let on, and it allowed me to step things up a bit, and explore a facet of Leadership that we don't normally talk about. In fact, I was a bit surprised when I took the mic, and I ended up saying I wanted to speak about Leadership through shared vulnerability and open-ness to transforming ourselves in the process.

Initially, I spoke about my journey - when I had decided to spark some change in myself as well as the community around me. I remember the early days when I had decided to move to the Gandhi Ashram. Armed with my business school insights and experience in capital markets, I had begun work by communicating with non-profits about developing skills and understanding money flows and processes.

A few weeks into my stay ath the Gandhi Ashram, I happened to meet Vinay Mahajan - a senior of mine from IIM, who had been doing some interesting work with communities in and around Gujarat for several decades. At one point, he was conducting some research during the construction of a cement factory in rural Gujarat. As you would imagine, the factory was resulting in a fair amount of displacement of farmers and their land, and his project entailed a study of this. All the farmers had received adequate compensation for their land, and were asked to move to their newly allotted homes. It seemed like a fair deal, but Vinay came across one such farmer, who he fondly referred to as Kaka, who seemed very upset.

'Kaka! I don't see why you're upset. It's a pretty good situation for you. You don't have to be dependent on your farm, you have a nice new home. Why the grim face?'

'I know why you're here son. I know you're creating a report on displacement. I know what you're going to be entering in your report. 3 acres of land cleared and compensated appropriately. It all seems fine on paper, but I think your report won't capture the entire truth of the situation. Of the three acres that I farmed on, I grew my grains and vegetables on one acre. Now, I'm going to have to go to the market to buy vegetables, but that won't be accounted for in your report. On the other 2 acres, I would grow grains - which also won't feature in your report.

It's not only what we humans use. In my fields, there would be cows and buffaloes who would pass by during their grazing route. Every day, I would greet them and they would feed on the grass around my fields. I don't know where they will go now.

Not just the animals, but the birds too. Every morning I would be visited by peacocks and mynahs who would visit my farms to feed on the grain. I wonder where they will fly to now. And the same goes for the monkeys who swing on the trees and the squirrels who work all day.

Look down in the soil. Do you see the little caterpillars, and bugs, the spiders and the frogs? Where will they go? What about the millions of bacteria and microbes who are churning the very soil that we stand on? What will they feed on? What will they take shelter in? Does your report capture all of that?"

At the end of the monologue, Vinay was taken aback. All these years, he had prided himself on his education and his understanding of the modern world. But here was a kaka, with one foot in the grave who was speaking about a world view that most would not even fathom. Most people spoke about 'Vasudeva Kutumbakam' or 'The World as a family', but here was this gentleman who was living it. Who could see the interconnections between him and the world as delicate silken threads that held the fabric of sentient beings. More than anything, he understood the causality that governed their inter-being.

Instantly, I was reminded of an interesting insight by Vinoba Bhave. He said, in Sanskrit, the root of the word 'Education' and 'Humility' were the same - and that they were inter-related. Perhaps, it was important for me to re-think how I was going about this journey in service. 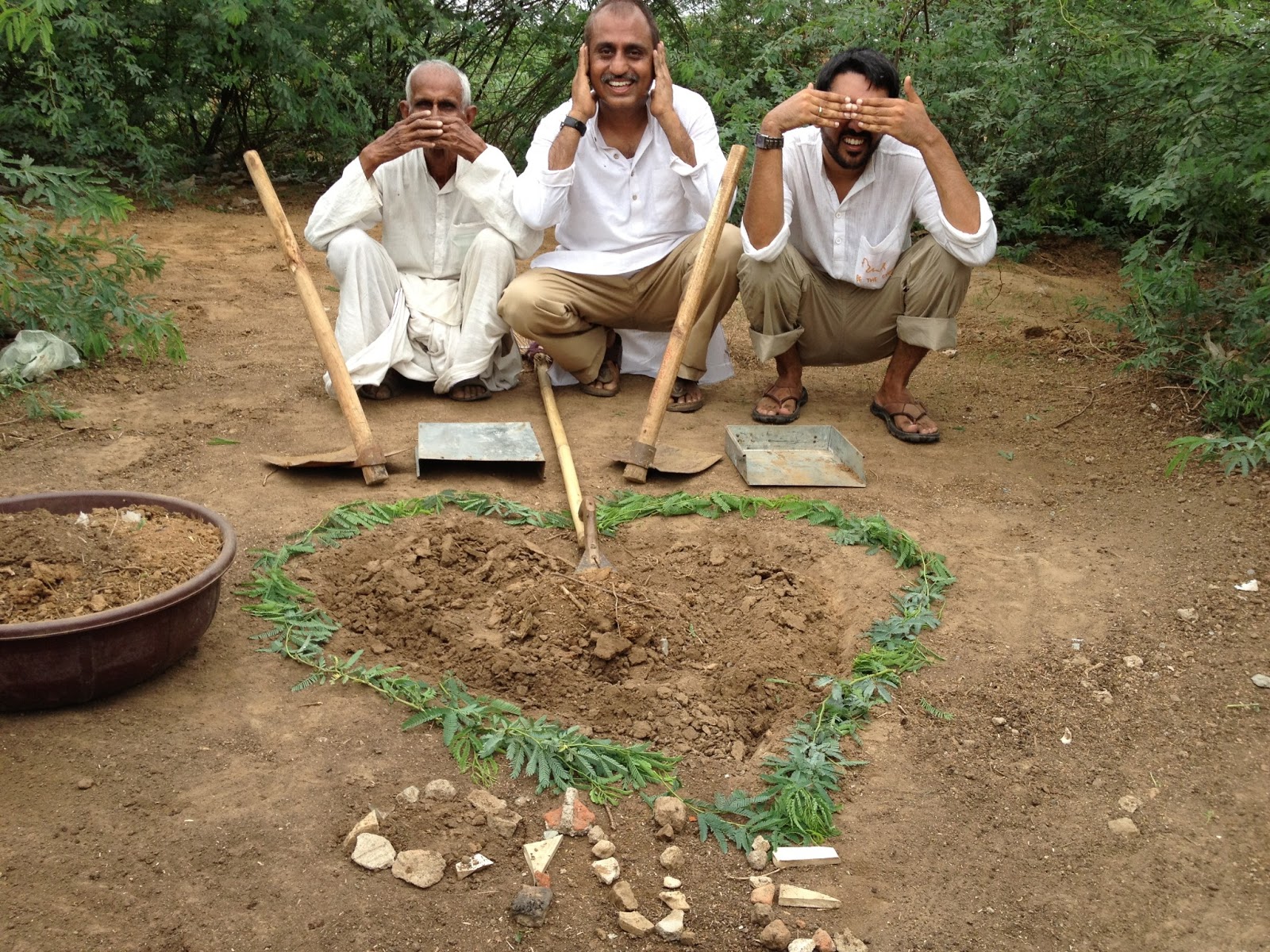 I began looking around me at all the decades of work that had gone into building the Environmental Sanitation Institute. All those millions of toilets built and communities transformed. All of it had come through the leadership of Ishwarkaka - who was revered as the Toilet Man of India. As I came to understand his approach a bit more, I realized he never went into communities with an all-knowing attitude. In fact, each community and village came up with designs for their own sanitation. All he did was facilitate their process. Towards the end of his life, he had a 'Toilet Garden' constructed within the premises with several different designs for toilets. 'Most people cultivate rose gardens, but for me, it's always been Toilets!', he would say. And as you walk around, you come across stories of the tiniest of design details which were offered by the communities that he worked with.

I've written a fair amount about my experience at Seva Cafe. The constant theme running through that transformation has always been letting go of my projections of how a person entering the space can be of value. Instead, I learned to operatefrom the space of assuming value everywhere. Each guest had now become an opportunity to serve as opposed to a source of revenue, and each volunteer was a journey unfolding instead of low cost labour. Each situation had become a gift that was begging to be unwrapped. Instead of planning where our resources would come from and executing based on these projections, I had learnt to receive with grace and unlock magic in places I never expected.

More than anything else, I found a very interesting process beginning. I was beginning to unlock capacities within myself that I did not know existed. In a way, being the change, was changing the being.

When we speak about Leadership, how often can we think about it as a process of undergoing change ourselves as opposed to changing our communities? Gandhi of course was at the forefront of this process of change. There are tonnes of research reports, books, films, documentaries made about some of his more visible forms of leadership. But staying at the Gandhi Ashram, I came across stories that you would hear only through word of mouth - and as I think back, have ended up transforming the way I look at life. 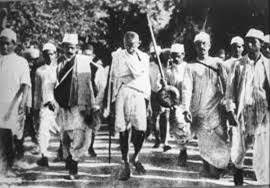 Once, Gandhi was on board a train passing through the villages of India and he chose to stand by the foot-board to watch the scenes whiz by. As he stood in the doorway, he accidentally lost one of his sandals (or chappals). As it fell down on to the tracks, there was a gasp from those around him. A few heads looked out to see if there was any way we could get it back. Not Gandhi. Without a thought, it is said, he kicked off his other chappal down onto the tracks as well. And why? Just so that a passer by could make use of the pair.

You could sit back and analyse Gandhi's life. Some credit (or discredit) him with the independence struggle, others with building the nation, some have even criticized him a fair bit and a few claim he has inspired leaders like Mandela and MLK across the globe! But when you put all those headlines and discussions aside and you look at his life, you see it was built through beautiful micro-moments. You understand that leadership wasn't so much about how he thought or what he was doing, but more about the space he was operating out of. And I believe, that space had been created because of the way he had allowed the process to change him. 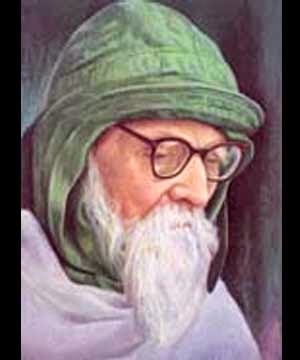 What would it look like in today's world, if we looked at Leadership from this perspective? We've been so used to paradigms that have been handed down from the colonial times that we cannot bring ourselves to think beyond the conventional 'Pyramidical Structure' that has a leader sitting at the top, directing those below him. What models would emerge if we allowed the process of Leading to change us? Personally, I'm excited to find out, but to close, I'd like to share one of the last passages that Vinoba wrote as a message for the 21st century.

"When we will all see our role in society as servants, we will all light up the sky together like countless stars on a dark night. Don’t think of society as the sky on a full moon night. The moon's harsh light blinds us to the true and humble work of the stars. But on a moonless night, the true servants shine forth, as though they are connected invisibly in this vast and infinite cosmos."

Love.
Posted by Siddharth Sthalekar at 12:40 AM