Bangalore traffic does have it's advantages. I arrived in the city the evening before the talk and on the two hour journey from the Airport  I was with two students of the Business School and another speaker - an incredible lady called Manjula who is an entrepreneur cum endurance cyclist. The students seemed amazed at my journey and wanted to know more about the whys and the hows. I started of with the usual insights into the harsh realities of businesses, the importance of values and service but surprisingly,  Manjula chipped in as well. We had conversations around how service ultimately is an offering to society when we come alive where we are. At recent conferences in the Silicon Valley of India, they've been exploring a decentralized 'Wiki' model for entrepreneurs. Manjula, has herself been working on such structures to facilitate distribution of wealth and scale. Of course, they are housed in capitalist values, but its incredible to see conversations beginning.

On arriving we're escorted by about a dozen students in smart suits toward a large-ish conference room for an informal circle of sharing with all the speakers. An army officer shared experiences from Kashmir - pretty horrific stuff, stories about an 11 year old being paid to throw grenades, militants being brainwashed etc. But he came down to this - the problem in the area is not going to be solved by technology and money. He cited example of how he asked European arms vendors to return since he saw this as a problem in human values, not lack of technology. He says that we have to collectively approach one another with pure intentions and transparency in our hearts. He was narrating stories of militants who have been transformed just by officers shedding their army-fronts to speak to them as humans. Like the colour of every human's blood, service is also not distinguishable he says - compassion and generosity are universal, and we must maintain that at all times.

A brief conversation later on Seva Cafe and you see people just 'get it'. Immediately you see barriers between people breaking down, and people almost feel free to share what they truly vibe with. Manjula shared stories of how her 500km non-stop bike ride last week led her to deep spaces in her sub-conscious. She says you reach stages when your focus is sharpened to a pin-point, and no questions remain. She recounts countless stories of generosity from the villagers along the way :) Among other inspiring speakers, Geeta is a 65 year old story teller! Her essence is to build bridges between 'Being' and 'Doing' through stories.

Unbelievably the evening ends with a senior professor of the institute sharing the three core values of the Upanishads - 'Giving, Humility and Compassion'. We even ended the circle with an explanation on why 'shanti' is chanted three times! I walk out to further conversations about how 'Smiling' is the best practice for your mind - and is something we must incorporate in our lives.  :) I've done so many trips on a flight on a Friday evening, spent hundreds of hours in conference rooms and business schools, but I have to say this is the first time I've experienced dialogues like these with people in ties and black suits. Everyone's talking generosity, and everyone, in their small ways is looking to contribute where they are, as entrepreneurs, students and professors. Almost a sigh of relief for me - up until then i was concerned about how my crazy thoughts might go down at the talk!

I reach the home where I'm spending the night, and I see chocolates outside the gate, with an anonymous hand written note that says 'Welcome to Bangalore Sid and La!' A small act of kindness from these unknown angels is just what I needed to make me feel at home :) Over a conversation late at night, an old friend who's hosting us says she's seen so many friends doing what we're doing externally - travelling  speaking, connecting. But the difference is its not for accumulation, but for giving away, and the difference is starting to show in us! :)

Just the kind of validation La and I needed.

The morning of the talk, and I'm convinced about the organization capabilities of MBA students. For someone handling this event for the first time, there were absolutely no hiccups. Every minute of the gathering, not only me but also the people I invited were greeted with great hospitality. At the event, the speakers really put out some great thoughts as you would imagine. Sanjay Jha who's an eminent columnist spoke about Social Media and the power to create revolutions through the internet, but ended with the example of Gandhi, and how simple purity of thought and action can also ripple out to mass mobilization of people! One of the speakers got a bamboo bicycle on stage that he rides around the country and ended with how happiness is derived by looking 'beyond the finishing line and goals that we set'.

All the talks including mine were well received, the audience was eager, and later I found out it was also broadcast in other rooms so that all the students could watch the event live! The three shifts I spoke about (Transaction to Trust, Consumption to Contribution and Scarcity to Abundance) seemed to click and register in everyone's minds - at the end of the evening, the Army Officer gets up again, walks to the stage and spontaneously gives a talk straight from the heart about the need for making these kinds of shifts, and working with pure intentions!

Over dinner though, I had some amazing interactions - one of the speakers who's an IIM Cal graduate came over to tell me the shifts I spoke about were exactly what his heart speaks of and wants to explore it in some way. Another guest shared how he was really annoyed with another lady in front of him who was talking all through the event. He was really agitated, but after hearing Swapna's story of kindness with the watchman, he decides to forgive her! There were groups of students who came up over dinner to speak about how they really vibe with this kind of thought (almost a thank-god-someones-talking-this-way types!) - which is pretty rare with Business students! Some of the professors too - they want to host more such gatherings in the coming months to start tapping into 'India's true potential'. 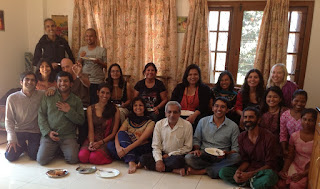 The next morning, around 25 of us gathered for an Awakin style gathering in the beautiful home of a volunteer couple - Anupreet and Goli. Apart from experiments in urban farming, and butterfly rearing, they are the engines behind the Seva Cafe in Bangalore. We opened our eyes to see old friends from past retreats right there besides us - it's amazing how an event created on the Service Space website actually connects people who are travelling through the city for just a day! A few lines of code connecting all these decentralized pockets of love. Another young man from Sri Lanka shared how he has been doing random acts of kindness for several years. One time, while googling for random acts of kindness, he came across Karma Tube, and the rest just flowed. A few years later, he finds himself here in the living room of people co-creating a space of trust :) Ofcourse, he was later tagged with a Smile Deck to keep those ripples flowing :) Everyone was tagged with three gratitude cards, to practice what they're grateful for and later in the afternoon we were joined by the man that made the 'Bamboo Bicyles' which one of the speakers spoke about the earlier night. Added to all this magic, the 'Dosawala' from the corner of the street shows up at the home, all willing to cook custom-made dosas for his friends!

Herbal teas by Shammi and Stephanie followed with Lahar and Anupreet discussing the power of hand painting and decorating spaces with positive words. 'Art with Heart' might just be the next things you guys hear of :)

Later in the evening, we found ourselves at a beautiful space centred on wellness - created by a couple Susheel and Kapila and hosts the Seva Cafes. They shared some incredible stories of how this space actually came about. Donors just writing them checks, well-wishers offering them a space to stay! Susheel also shared a story of how auditors were asking him to 'establish' himself before doing the Seva Cafe once a month. One of them actually visited the last Seva Cafe, and the 150 odd guests and 50 volunteers that day have actually convinced him to bring along the other auditors and bankers on Feb 24th :)

At night, on the flight home, I receive an email from one of the students the earlier night which ended with 'Through the inspiration, we realize that Management students can also follow their Passion!' As I switch off my phone, I sink into thoughts of how I've spent several years with a disconnect with my qualifications - I would rarely introduce myself that way, or detest being introduced through it. But the last couple days have actually got me accepting it, in a way. Perhaps I've begun to see how it could be used 'well'. Perhaps I'm starting to see some merit in being called an IIM-wala :)

May the flow of generosity keep growing and transforming us all :)

Moved By Love.
Posted by Siddharth Sthalekar at 7:08 PM